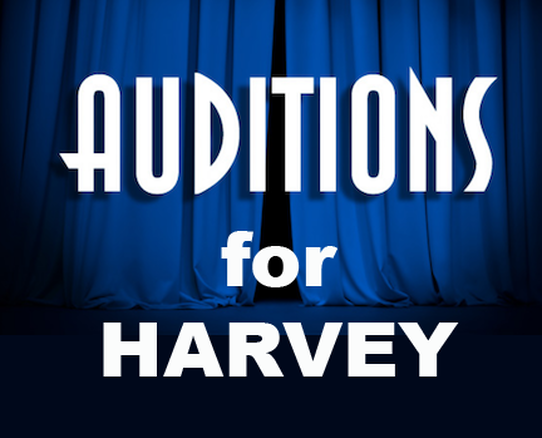 "HARVEY" is not just a "little, lighthearted comedy" but one that's been compared to "Cuckoo's Nest" in its handling of mental illness and alcoholism. It won the Pulitzer Prize over Tennessee's "Glass Menagerie" in 1945!  Directors are Craig Anderson and Richard Camp.

HARVEY, a Pulitzer Prize-winning comedy, is the story of a perfect gentleman, Elwood P. Dowd, and his best friend, Harvey -- a six-foot-tall, invisible rabbit. When Elwood begins introducing Harvey around town, his embarrassed sister, Veta Louise, and her daughter, Myrtle Mae, determine to commit Elwood to a sanitarium. A mistake is made, however, and Veta is committed rather than Elwood! Eventually, the error is realized, and a frantic search begins for Elwood and the invisible rabbit, which ends with Elwood appearing, voluntarily, at the sanitarium. Oddly, the invisible rabbit has a strange influence on the sanitarium workers, including the head psychiatrist, Dr. Chumley. In the end, with the advice of a no-nonsense cab driver, Veta realizes that she loves her brother and his invisible best friend just as they are and doesn’t want either of them to change.

Dr. William B. Chumley (Age 50-80) Dr. Chumley is an esteemed psychiatrist and the head of Chumley’s Rest with years of experience. He is a difficult man who will go to any length to protect the reputation of his sanitarium.

Dr. Lyman Sanderson (Age 20-35) Dr. Sanderson is a young and highly qualified psychiatrist, handpicked by Dr. Chumley. Talented, vain, and a bit obtuse. He is as infatuated with Nurse Kelly as she is with him, though he struggles not to let on.

Wilson (Age 20-50) Wilson is the bluff, gruff muscle of Chumley’s Rest, a devoted orderly responsible for handling the patients who will not cooperate voluntarily. He sets his sites on Myrtle Mae Simmons soon after meeting her.

Judge Omar Gaffney (Age 40-80) The judge is an old family friend of the Dowds and the family’s lawyer. He is fiercely protective of the family and surprisingly understanding of Elwood’s belief in Harvey.

Veta Louise Simmons (Age 35-55) Elwood’s sister, Veta, has returned to the family home after the death of her mother and is intent on landing a suitable husband for her daughter Myrtle Mae. She is very concerned about fitting into society and all the social proprieties that that involves. She also loves Elwood very much, and this is the dynamic that drives the action of the play.

Ruth Kelly (Age 18-35) Nurse Kelly is a sympathetic character, a pretty young woman who has a love/hate relationship with Dr. Sanderson. She is sweet and kind and looks for the best in people.

Myrtle Mae Simmons (Age 18-30) Myrtle is Veta’s Daughter (Elwood’s Niece). Both Veta and Myrtle are about the business of finding Myrtle a man to marry…a mission that is made impossible with Elwood and Harvey continually popping in. Myrtle is extremely self-centered.

Ethel Chauvenet (Age 50-80) Mrs. Chauvenet is an old friend of the family. She is an elite member of the town’s social circle that Veta desperately wants Myrtle to break into.

E. J. Lofgren (Age and gender open) E.J. Lofgren is a cab driver whose monologue about sanitarium passengers is crucial to the climax of the play. This role has a single scene near the very end and would have a limited rehearsal schedule.

Craig Anderson first found success in New York as one of the founding members of the Hudson Guild Theatre. He directed “On Golden Pond” there and when it moved to Broadway. He won a Tony Award for producing Brian Friel’s “Da,” with Barnard Hughes, and continued to direct more than 30 plays that sensitively explored the complexities of the human condition. He then moved to L.A. and formed Craig Anderson Productions. Among his 40 plus TV movies are “O, Pioneers,” with Jessica Lange, August Wilson’s “The Piano Lesson” with Alfre Woodard, “True Women,” with Angelina Jolie, “Return of the Native,” with Catherine Zeta-Jones and Clive Owen, and a live TV version for CBS of “On Golden Pond,” which re-united Christopher Plummer and Julie Andrews for the first time since “The Sound of Music…” He continues to produce and direct and he looks forward to playing to another Ojai audience after 2018’s production of “On Golden Pond,” which he directed at OjaiACT.

Richard has previously been Artistic Director of the Ojai Art Center Theater, where his play “Bless Your Heart” enjoyed a critically and financially successful world premiere. His other playwriting credits include Diamonds, at NY’s Circle in the Square Theatre, directed by Harold Prince, Cuckoo Bird at NY’s Vortex Theatre, Waiting for Garbo at LA’s Colony Studio Theatre, and stagings of Credo, at LA’s Odyssey Theatre with Jean Smart and Richard Gilliland, and at L.A.’s Coronet Theatre with Bruce Davison. He’s written a host of TV shows in nearly every genre and is a three-time Emmy nominee and Emmy winner, plus a Writers Guild Citation recipient for CBS’s Capitol.  His directing credits include two madcap farces at the OACT, Black Comedy and See How They Run, plus Zero Hour.

Please visit an online version of the script at:
https://www.pellcitycenter.com/wp-content/uploads/2016/11/Harvey.pdf
Familiarize yourself with these scenes for the character you are auditioning for:

Chumley (Sanderson)
pp. 32-33 (from “Dr. Sanderson, I believe your name is Sanderson?” through “well get that woman out of the tub”)

Wilson (Myrtle Mae)
pp. 42-43 (“so your name’s Myrtle Mae?” through “screwiest uncle that ever stuck his puss inside our nuthouse!”

Kelly – Sanderson
pp. 47-48 (from “Dr. Sanderson—through “I’d like to know where you got that inflated ego”)