“Harvey” is Worth the Wait as Comic Relief Reigns
by Sami Zahringer, Ojai Valley News 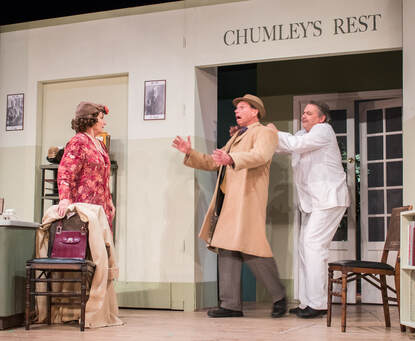 Orderly Alexander Schottky grabs Elwood (Dr. Jim Halverson) to take him in for examination while his sister Veta (Laurie Walters) looks on. Photo by Stephen Adams
Here is something to cheer us all up! Delayed two years by the pandemic, Ojai Performing Arts Theater finally delivers “Harvey,” Mary Chase’s Pulitzer Prize-winning comedy. OPAT’s indefatigable Executive Producer, Joan Kemper, and producer Stuart Crowner, together with co-directors Richard Camp and Craig Anderson, have put together a production worth the wait and with something relevant to say to contemporary audiences in our mad, mad world.

Plain-speaking, good-hearted gentleman Elwood P. Dowd (Dr. James Halverson) is an amiable, wealthy, gin-soaked sot who starts having visions of a giant rabbit named Harvey. Elwood has inherited his mother’s mansion and lives with his dizzy, image-conscious sister Veta (Laurie Walters) and her grasping daughter, Myrtle Mae (Brittany Daniel Schottky). Veta and Myrtle believe Elwood is insane and are socially mortified by his introduction of Harvey to all their friends, especially as Veta is trying to find a respectable husband for Myrtle.

​At the end of her rope, Veta decides to have Harvey committed to Chumley’s Rest, a nearby sanitarium. The junior Dr. Sanderson (Casey Robbins) encounters the siblings separately, not at first understanding who the patient is. Dissatisfied with seeing a junior doctor, Veta insists on seeing the sanatorium director, Dr. Chumley. She admits to the patrician, no-nonsense Dr. Sanderson that she occasionally sees Harvey herself. The farcical misunderstandings mount, and the comic momentum gathers. To the hubristic Dr. Sanderson, rabbit-seeing Elwood seems supremely unflappable, while rabbit-less Veta is one giant flapping nerve-ending, and Sanderson commits her instead. Meanwhile, Nurse Kelly (the delightfully comic Angélica Smith) finds herself doubting her sanity as the eminently reasonable-seeming Elwood - alongside the invisible Harvey - charms her with his good nature and manners.

Soon, the wave of confusion crashes in the sanatorium, the truth becomes apparent, and the mortified Sanderson orders Veta’s release. A disheveled Veta is hilariously outraged and apoplectic at her infamous treatment at the hands of Sanderson and the asylum’s altogether sane orderly, Wilson (a manically driven Alexander Schottky). Dr. Chumley (the wonderfully sonorous Mark Capri) tries to mollify Veta while struggling to reconcile his duty to help Elwood with his growing belief in Harvey.

he comic antics of the supporting cast (including Susan Kelejian as Mrs. Chauvenet and EJ, the taxi driver; Margaret Welsh as Mrs. Chumley; and David Newcomer as Judge Omar Gaffney) are laugh-out-loud entertaining as events pile on top of each other in perplexity and alarm, but at the heart of the play is calm, sweet, unflappable Elwood. James Halverson projects a gentle, winning innocence in the role made famous by James Stewart in the movie version, distinct and refreshing in a cynical, knowing world.
When certainties start to fall away, will we panic, do each other harm, or do as Elwood does and choose imagination as his savior? In a crazy world, how rational is it to be considered sane anyway?

​Kenny Dahle has created an ingenious inside-out rolling set for smooth scene changes. Costume designer Mary Crane with her team (Kyle Crowner and Michal Gaidano), brings us back to the 1940s in the service of Elwood P, Dowd, the man who understands it is wiser to be kind than clever.

Performances run this weekend at Matilija Auditorium, Friday and Saturday at 7:30 pm, and Sunday, April 10 at 2 pm. A portion of the proceeds benefit Help of Ojai. Proof of vaccination is required, and masks are optional within the theater. 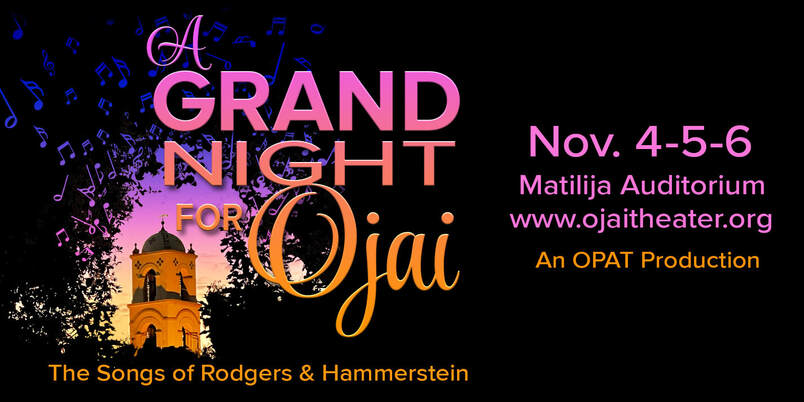 Cast for A Grand Night in Ojai Announced 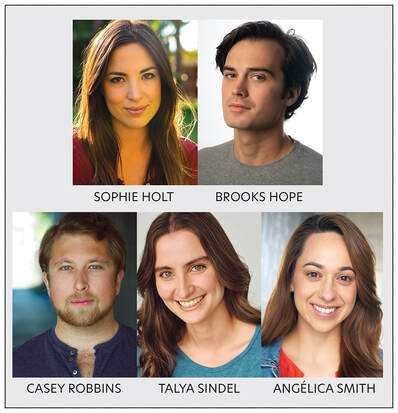 Director Richard Camp is very happy to announce the cast for "A Grand Night for Ojai."  "It's one that combines performers that audiences have treasured in the past," says Camp, "along with new faces and voices that will soon add more treasured memories for the audience members.  Scott White and Laura Dekkers have shared their numerous talents with OPAT, and will continue to do so for this show.  And we're very excited to add some very talented voices to join them in this musical adventure honoring Rodgers and Hammerstein."

SOPHIE  HOLT  was born in England but raised in the USA where she was encouraged to express herself in various musical genres: jazz, rock and Broadway (shows such as Rent and 35MM). She currently sings with many bands from an 8-piece jazz band to a 7-piece Yacht Rock group. She’s also a classical guitarist and a songwriter who’s gearing up to write songs for an album.

BROOKS HOPE  is a classically trained jazz vocalist who also sings German lieder! His BA degree in Music Performance and Theater from the highly regarded Bennington College in Vermont, encouraged him in these wildly different genres.  He performs jazz standards regularly with his band “Gold Rush Constellation.”  But his memories of singing Schubert’s twenty song cycle Die Schone Mullerin are still alive.

CASEY ROBBINS is proud to be a local guy who launched his theater career on the Matilija stage where our show lives.  He’s a multi-hyphenate actor-director-composer-teacher who appeared in OPAT’s Harvey this year as well as many shows at San Francisco State University, among them Avenue Q, A Chorus Line and Spring Awakening. He’s currently directing children in The Wizard of Oz at Ojai’s OYES.

TALYA SINDEL is a huge fan of the Rodgers and Hammerstein songbook and is impressed with her talented onstage colleagues.  Credits in the opera genre include Mozart’s Cosi Fan Tutte and in the musical theater genre the new musical Camille. She’s been cast as Circe in a concept album of the musical EPIC, based on Homer’s The Odyssey. Career  updates on www.talyasindel.com

ANGÉLICA SMITH is an Ojai native who was last seen locally in OPAT’s Harvey where she played the frisky Nurse Kelly.  Her credits in musical comedy are many: Sondheim’s Company, Miss Olson in Promises, Promises, Helene in Sweet Charity for which she earned a Broadway World nomination. She is enjoying her recent work in the camera media of TV and film. Follow Angelica at TheReelAngelicaSmith.com